Last year, the World Games, a non-profit organization led by the International World Games Association, selected HPM to serve as the Official Program Management Partner of The Games for 2022. Through our work on high-profile projects for global clients throughout the U.S., our project management team brought to the partnership our extensive knowledge and experience in leading construction projects to completion on time and within budget while maintaining safety, achieving quality, and maximizing our clients’ resources. HPM provided construction management services with a focus on temporary fields of play for The Games at sites around Birmingham, such as beach handball courts, canopy piloting field of play and boules courts. 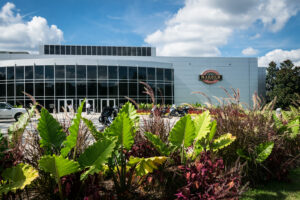 Barber Motorsports Park is an 880-acre, multi-purpose racing facility located on the eastern fringes of Birmingham. For the canopy piloting competition, we worked with a contractor to build a man-made swoop pond at the venue, which will be two to three feet deep and offer a long runway for the parachuting competitors to decelerate and perform tricks. Our team put a lot of effort into finding a contractor who was capable of undertaking this unique project. Designed on a massive grass parking lot, HPM worked with geotechnical engineers to determine the location of the rock underneath the soil and adjust the specifications to accommodate the uneven topography to create a level pond.

The swoop pond will hold approximately 390,000 gallons of water that will be supplied from an onsite lake and consideration had to be given as to how to replenish the water daily to accommodate the evaporation from the hot, summer sun. Irrigation lines were removed, and new water lines were put in place to fill and drain the pond. Each venue that HPM provided project management for will have to be returned to its original state after the completion of the World Games. Upon completion of the event, we will coordinate the pond getting filled in and sodded.

At Avondale Park, a 40-acre wooded park on the slopes of Red Mountain, we helped the World Games develop a temporary field of play at the existing baseball fields. We ensured that it met the World Archery specifications and standards while keeping safety our number one priority. In addition to erecting the 60-meter target lanes, our team worked closely with World Games officials to build a safety wall and problem solved to determine the most cost-effective and safe solution. After brainstorming several potential options for the wall, our team moved forward with constructing a wall made of scaffolding and supply wood. To ensure that the project was as economical as possible, HPM partnered with the Associated Builders and Contractor’s Academy of Craft Training. The Academy is a trade school for students in high school and college to learn carpentry, electrical and other trades. The carpentry classes were able to build the 40 wooden, A-frame target stands for the archery competition and enjoyed the opportunity to be a part of the monumental sporting event. 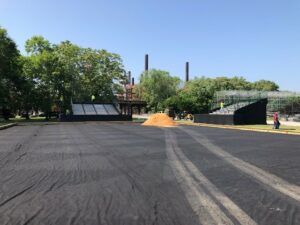 HPM worked with World Games officials to coordinate contractors to build four large beach handball courts at Sloss Furnace, a former pig iron-producing blast furnace and a National Historic Landmark. Due to the large amounts of rain that the Birmingham area can experience during the summer, our team recommended that the courts be built above ground to allow for additional drainage, rather than the planned in-ground courts. We collaborated with the contractor, who had never worked on a similar project, to work through potential challenges and help ensure that the project was executed properly. The beach handball courts at Sloss Furnace included approximately 50,000 cubic feet of sand and gravel delivered by 74 tri-axle trucks and HPM installed roughly one-third of a mile of raised edging around the four courts. 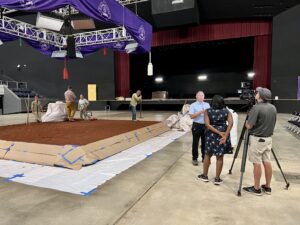 Boutwell Auditorium, which seats 5,000 people concert style, will be the home of the sumo competition during the World Games. When our team set out to manage the construction of the first official Dohyō, a circular sumo wrestling ring, they did extensive research on the traditions and tools used in Japan for it to be classified as official and not violate the sacred traditions surrounding the sport. The Dohyō, which will consist of approximately 14 tons of compacted pitcher’s mound clay, is 16 inches tall and 20 feet by 20 feet in size. HPM kept in constant communication with the head of the International Sumo Federation in Japan to gain approvals for the various steps in the planning and construction process.

Similar to our work at Sloss Furnace, our team assisted the World Games in lining up contractors to build the temporary field of play courts for the boules competition, which is similar to bocce. The competition will be held at Bessie Estell Park, a 5.2-acre park near the University of Alabama at Birmingham’s campus. We coordinated the construction of an above-ground, wooden frame filled with a concrete and pea gravel mixture. We were strategic in choosing a contractor and ensured we understood the specifications and requirements of the project so our team could effectively communicate the needs of the World Games for this venue.

HPM was honored to be chosen to serve as the Official Program Management Partner of The Games. Our team displayed excellent communication, problem-solving skills, quality assurance and adherence to deadlines and budgets. With the World Games kicking off right here in the Magic City in just a few days, we look forward to cheering on the athletes competing and wish everyone a safe competition!