Like many public school districts across the U.S., Homewood City Schools was faced with aging buildings and a growing student population. Administrators and school board members benefitted from a $55-million bond issue obtained through the City of Homewood and added to the monies the school district had in its reserves. However, like most, the needs outweighed the resources, and competing priorities of those needs required a hard look at the data.

“Starting with studies, surveys and assessments and working from the best available data, we identified a bubble moving through the school population and planned accordingly,” Project Manager Jeremiah Owen said. “No stone was left unturned when looking at options to address the needs and desires within the defined budget. We looked at many different options, and ultimately decided that upgrading existing facilities was in the district’s best interest.”

Three aging elementary schools received classroom additions, renovations and upgrades, leaving room for growth as necessary. The middle school, which is just beginning to feel the effects of the bubble, is a newer building that benefitted from space planning and interior renovations to add classrooms.

“The Homewood Board of Education, along with the Homewood City Council, began to envision a new and fresh update to our current educational space—a concept that would make best use of our original spaces while providing expansion and growth potential for the next 50 years,” said Dr. Bill Cleveland, Retired Superintendent of Homewood City Schools. “We hired HPM to work with us—to turn hopes into reality, to optimize an assortment of ideas into an amalgamated strategy. The HPM design team provided leadership and guidance that quickly lined up to our budget and often surpassed our scope of thinking.”

The 70s-era high school needed the most help, and received more than a dozen new classrooms, updated athletics and performing arts wings and interior renovations to modernize the overall facility. Improvements to building automation and access control increased security and allows for troubleshooting to be performed from any device, which saves maintenance time and money.

Built in 1972, Homewood High School expected to hit two milestones at the same time: its 50th birthday, and its full capacity of 1,200. News of the bond issue, a hastily assembled land use study and the hopes and dreams of many community members spun into grand plans for a new high school. When HPM first met with Dr. Cleveland, we outlined our extensive process that starts long before plans, grand or otherwise, are made. Our preconstruction team started with a demographic study to assess the community’s needs and a facilities assessment of each school to see what we would be working with.

Working with comprehensive information, HPM’s team determined that construction of a new high school exceeded the system’s needs and far outstripped its budget. Instead, we were able to draw up a plan for renovations, expansions and updates to all five schools in the district to anticipate population growth, provide newer and more functional facilities and address the top priorities laid out in community meetings and surveys—while staying within the available budget.

“We were able to address the needs of the district by putting together a renovation and addition plan for a fraction of the cost of a new build,” Owen said. “This also meant that the high school remained centrally located in the heart of the community.” 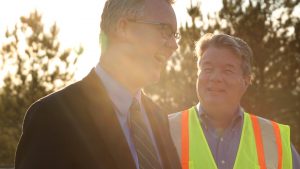